The gateway to Alissia was discovered some fifteen years ago, on a remote island in the South Pacific. Most of the island’s inhabitants lived at sea level, near the coast. The island’s high hills saw few visitors, except for the occasional shepherd and his flock. It was one such man who stumbled on the thing that changed my life.

According to his relatives, the man had gone up on into the hills to recover some sheep after a storm, and was gone for two days. He stumbled into the village two days later, rambling about a dream world in a cave. And in the middle of summer on a tropical island, he was was frostbitten. 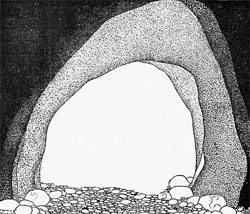 The shepherd died within hours, but not before telling his sister what he’d found. She found the cavern and saw the gateway for herself, I’m told, though I’ve been unable to contact her directly. The next day, she traded the information to a fisherman in exchange for his day’s catch. The fisherman called his brother, who’d traveled to the US on a tourist visa and remained there illegally. He worked nights as a janitor in the executive suites of a certain multinational corporation.

The company sent a recon team to assess the find, and to spread hush money around the village. Because of the unusual way in which the gateway was found, the knowledge of its discovery was contained. No press. No government officials. Company executives quickly decided to maintain that containment until they fully understood what they’d found.

In the cave was a shimmering, dome-shaped portal. A gateway that led another world. Alissia. Much like Earth, that world was planetary and water-based, in what astronomers called “The Goldilocks Zone” — just the right distance from its solar center that water existed in liquid form. The constellations in the other world’s night sky were unfamiliar. And it was inhabited. The size of the population remains a matter of some debate. On the mainland continent — the only part of the world we’ve been able to explore — it almost certainly numbers in the millions.

Within two months, company representatives had bought the island, relocated its native inhabitants, and built a state-of-the-art research complex around the cavern itself. Once the gateway was secure, they hired a research team to begin studying the world on the other side.

That’s where I come in. Read my story.